Tbilisi, Georgia immediately seduced us with its sunny skies and warm weather when we arrived in mid-September. After a dizzying week or so of nonstop exploring the city by foot, meeting unbelievably hospitable people, and being invited to a Georgian wedding, Paul and I became entranced with the country and decided to book six more weeks in the capital city.

We had settled into a satisfying daily routine of working, exploring, eating, and drinking, when the early October rains descended. For three days we remained holed up in our (thankfully) cozy apartment as torrential downpours overtook the city. Needless to say, we had cabin fever. As I mulled the mysteries of life (translation – binge-watched RuPaul’s Drag Race) while Paul threw me irritated side-eyes as I incessantly hummed the show’s opening chorus, we both decided we needed to face the rain and reignite our city explorations.

Museums were out of the picture, as Paul can’t stand going to them with me. I’ll just say that our museum-visiting styles are different. Paul’s more of a skimmer while I really like to immerse myself in each exhibit and then immediately forget everything when I leave the building. After subjecting him to a four-hour museum marathon during our 2015 European travels, Paul put the kibosh on them as a future fun couple activity.

The sulfur baths it is.

Relentless rain and a strict museum ban is how we decided on an outing to the sulfur baths. Tbilisi’s bath district, Abanotubani in Georgian, is located in the heart of Old Town, the most touristic part of the city. Legend has it that these naturally occurring hot springs are the reason that the King of Iberia established the capital in the surrounding area. Visiting the baths is a normal part of life for many locals – they tout the health and skincare benefits of the water.

For foreigners, the opinion of the baths is a little more mixed. Anticipating that Paul would not want to miss this cultural experience, I had been mentally preparing myself for it by surreptitiously conducting extensive online research since our arrival in Georgia. This was partly because I was not really sure what the whole bathing process entailed and partly because I have a strong aversion to anything that involves public water pools invaded by half-clothed or naked strangers. In the United States, water parks are my worst nightmare. Call me a crank, but I don’t want to navigate crowds of wet, screaming kids and their parents, particularly while wearing a bathing suit. I’ve recently become more comfortable with pools, but not without making concerted efforts beforehand to banish the thought of how many people are peeing in the water.

Needless to say, I had some concerns about the experience and a boatload of neuroses to overcome.

Since one goal of open-ended travel is to abandon one’s comfort zone, I willfully ignored the negative reviews that I had found on the baths which involved people complaining about the smell (they’re SULFUR baths, people!) and posting pictures showing pools with dubious-looking hygiene standards. Digging deep to conjure up some enthusiasm, I reserved us a private room for 70 (about $25) lari at Gulo’s Thermal Spa, a local favorite.

The bath district is compact and beautiful, overlooked by Narikala Fortress on one side and bordered by the Mtkvari River on the other. The tops of the bath buildings – protruding, red domes – are very distinctive. A pungent sulfuric odor wafts up from the ground – not exactly an aromatic delight but not terrible, either. Here you will find many tourists embarking upon their bath maiden voyage, but also locals dutifully ignoring the visitors while going about their daily routines.

Our private reservation at Gulo’s consisted of a long corridor of three connected, tiled rooms that ended in two cerulean pools, one containing a blistering hot sulfuric spring and the other filled with frigid water. My neuroses surfacing, I did a slow inspection of the area and determined that there were no unsavory remnants left by prior bathers. With no shortage of dramatics, Paul and I gingerly submerged our bodies into the steaming cauldron that they call a sulfur pool and waited until we could not take it anymore…a valiant 5 minutes. With an hour-long reservation, we were not sure how we were going to make it.

That’s when the other pool, which at first had seemed like an icy hell, caught our attention and was now beckoning us toward it as sweat began to roll down our brows. Succumbing to a combination of overwhelming heat and sudden lightheadedness, we both dunked into the freezing water, which despite our desire to cool down, was still freaking cold. Five minutes of that shock to the system and we were ready to re-enter the sulfur, causing our limbs to burn and tingle, but…. in a strangely…. good way. And that’s how the first thirty minutes of our sulfur bath transpired – switching back between the pools every few minutes in an awkward, disorganized dance. Not talking too much, but rather gasping at the bite of the opposing extreme temperatures.

I am not sure if it was some fugue state we had entered into, but twenty minutes in, we both began to feel FABULOUS. Somehow, the rapid exposure to the water, one that heightened and exhilarated the senses, was creating an antithetical effect on our limbs, making them flimsy and completely relaxed. My initial misgivings about the entire experience were being washed away, along with my dead skin cells. “Huh, I thought, maybe there IS something to this procedure that has survived for THOUSANDS of years!”

Our reverie was suddenly interrupted by a loud slam of a door and a brusque hello in a deep man’s voice. For a moment I thought our bathing experience was taking an unexpected, unwelcome turn, but then I remembered that Paul had ordered a massage, and that indeed, as my research had foretold, it would be performed by a man. Judging by the sound of his voice,  it did not seem like this guy was going to turn on the Enya and light some candles. Giving himself a deep breath of encouragement, Paul lifted his naked buns out of the water with a halfhearted, “Here goes!” I remained in the bath area, not ready to flaunt myself in front of our masseuse-friend. This was my first go-round and I had my limits. Continuing my dips into the adjoining pools, I fell back into relaxation, with one ear cocked.

After a few minutes of hearing loud splashes and stalled communications due to the language barrier, Paul yelled out to me, “Sweetie, you gotta see this!” I was not quite sure I really needed to see anything, but I complied. I peeked shyly around the corner of the bath, overcome with crippling modesty, to see how the massage was progressing. It was a sight to behold. 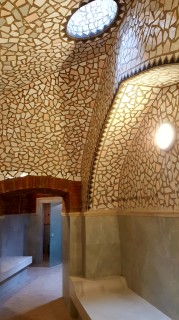 Marble slab that was the site of Paul’s massage manhandling, literally.

There appeared to be nothing soothing or relaxing about the massage treatment. My buttnaked husband was seated on a cold slab of marble, his arms being furiously scrubbed down by his masseuse, a short, muscular, tattooed Georgian man donning swim trunks and wielding an exfoliation sponge. With quick, military-like movements the masseuse hauled up a big bucket of suds and hot water and threw it on Paul’s head, dousing him with it. Before my very eyes my husband was enveloped in lather, disappearing into a white, frothy puff, not unlike a cumulonimbus cloud. Chilled by the air and feeling slightly awkward, I skittered back over to the protection of the sulfuric pool, practically swan-diving into it. What had only an hour ago been the victim of my skepticism was now pretty much my favorite thing ever. I had been converted.

I heard another aggressive splash of water and the masseuse exclaim in enthusiastic, heavily accented English, “Squeeeeeeaaaaaaaky clean!” This was met by a few grunts from Paul, which I took as meaning he agreed. In a matter of ten minutes,  the treatment was over. Paul returned to the pool fully exfoliated and stripped of all modesty to soak in the last few minutes of our reservation. Our first, and certainly not last, trip to the sulfur baths, had come to an end. 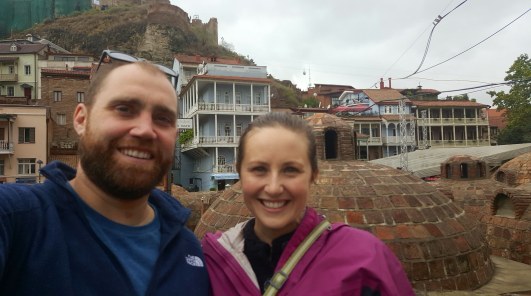 Blurry and blissed out after our bath.

2 thoughts on “Squeaky Clean at the Sulfur Baths”