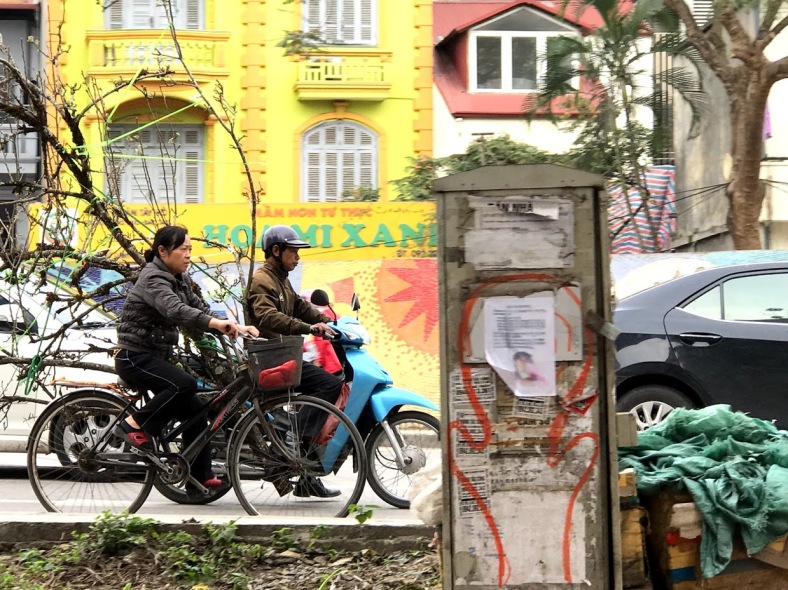 Walking in Hanoi always puts us on high alert as we’re pedestrians in a city characterized by its crazy flow of two-wheelers. The motorbikes honk incessantly. They transport whole families, trees, dogs, kegs of beer, and bouquets of flowers. They U-turn with impunity, somehow snake through still traffic (as a taxi passenger, I often consider giving fist bumps to the passersby).

In order to cross the street, you have to walk into oncoming traffic. Just don’t stop moving because the motorbikes and cars will adjust. This can be a terrifying experience.

Nonetheless, Vietnam has been a great and fascinating place so far. If you hear people say that the food in Vietnam is amazing, they aren’t kidding. Count us in as being enamored by the mixture of flavors often available at modest street stalls, with colorful and tiny plastic chairs and tables strewn about. The other day we ate Bánh Xèo, a crunchy, omelette-like concoction that you cut up with scissors and then wrap in rice paper. Add lemongrass, fresh herbs, green banana, fish sauce, maybe fresh chilies. Throw in some grilled pork sausage on skewers if you’d like. Unbelievably delicious (which I repeated to Rebecca in between bites over and over again). Plus, the feast amounted to about three bucks. 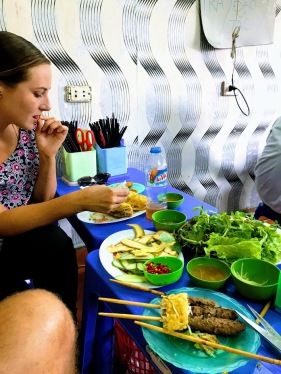 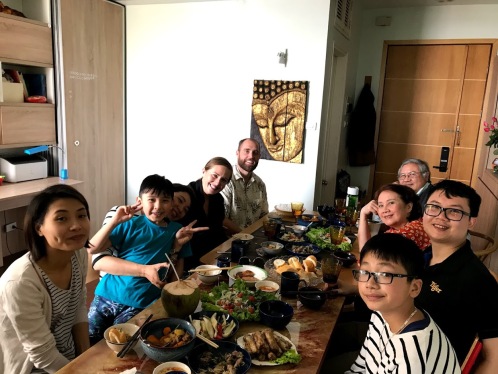 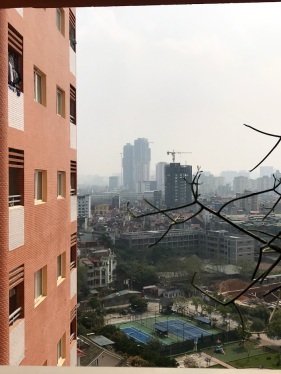 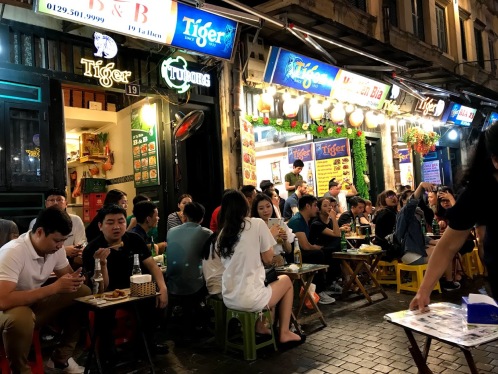 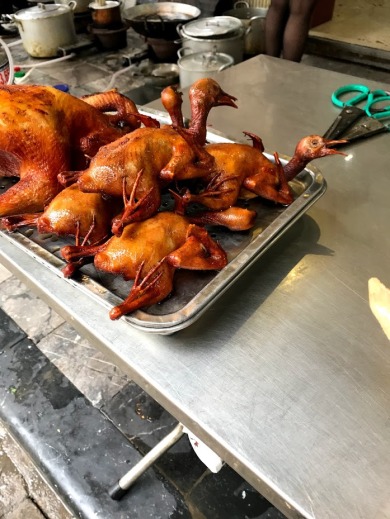 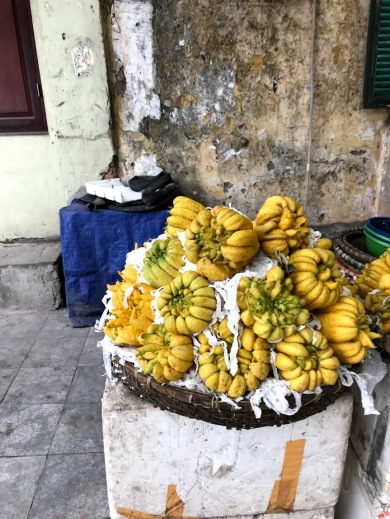 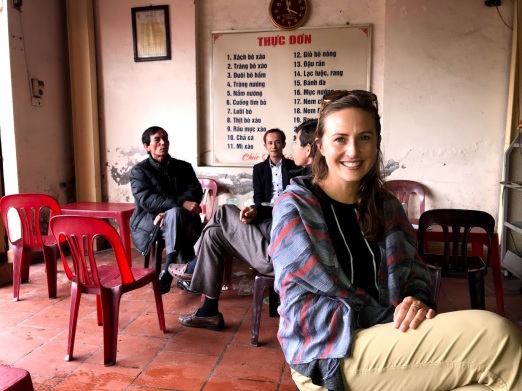 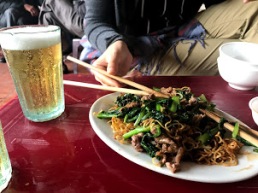 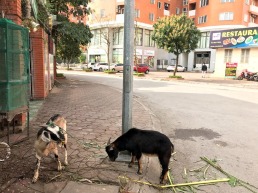 Hanoi is huge, with many distinct districts and neighborhoods. We first stayed in Tay Ho, which has an international feel and plenty of expats, where you can readily find Vietnamese street food but also a brew pub and a bacon cheeseburger. We’re now staying in a district northeast of the city center, where it’s rare to see any foreigners. The touristy Old Quarter seems to be poppin’ at all hours; admittedly, the coupling of sensory bombardment and survival mode to avoid being run over by motorbikes overwhelmed me a bit during our first foray there. We sought refuge at a spa where we enjoyed some outstanding foot massages.

We’ve only spent one night outside of Hanoi thus far. Uncle Ty’s Farmstay was in a small village near Hoa Binh, where farmers led small herds of water buffalo to wallow in the irrigation canal. The haze draped the hills and rice paddies existed anywhere enough water could be diverted. Some aspects of it felt timeless, old school, a continuation of long agricultural traditions. Yet from 7-10 pm, a local man crooned nonstop during a solo karaoke session. Korean and Vietnamese tunes, we were told. I imagined an impassioned attempt to earn a spot on Vietnam Idol or whatever exists here. As he went silent, we heard the rice fields become ablaze with noise, almost like we were tuned into 94.9 The Insect. I’m looking forward to our next trip to a rural area where the collision of tradition and modernity will certainly manifest itself in other ways. 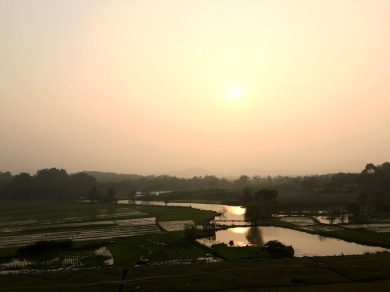 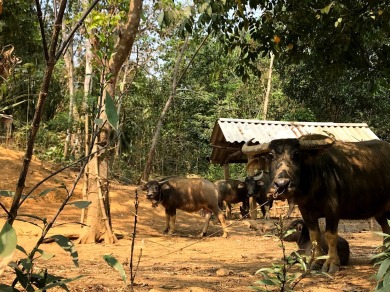 It’s a country that seems to be a polarizing place for many visitors as many love it and others vow never to return. Here, Nomadic Matt describes his experience almost 10 years ago and, due to the popularity of his blog, there are interesting comments and rebuttals worth reading if you are considering traveling here. Not sure if it’s still relevant, and since Rebecca and I are doing more living in local neighborhoods than touristing, our perspective is different as we haven’t inhabited places where we’d be bombarded daily with tourist hawkers and schemers.

Being here has made me think back to a post from several months back, during which I reflected on what it means to truly know a place. The motorbikes hum and honk in every direction; being outside of this traffic flow is a metaphor for simply being a spectator of the culture. Here are some snippets that have captured my imagination:

I’ve come to the conclusion that I could never really know Vietnam, especially due to the language barrier, but I wholeheartedly suggest intrepid travelers add it to their destination list. We’ve felt very welcome and feel fortunate to snag insights and new understandings of the culture when we can. Next stop in this country is Ha Giang, which we’ve read is one of the final frontiers for tourists. It’s the northernmost province and borders China. We might be crazy but we’re going to attempt a motorbike tour, finally joining the flow of people and goods as we attempt to understand a little more about this compelling country.

One thought on “The Mystery and Allure of Vietnam”