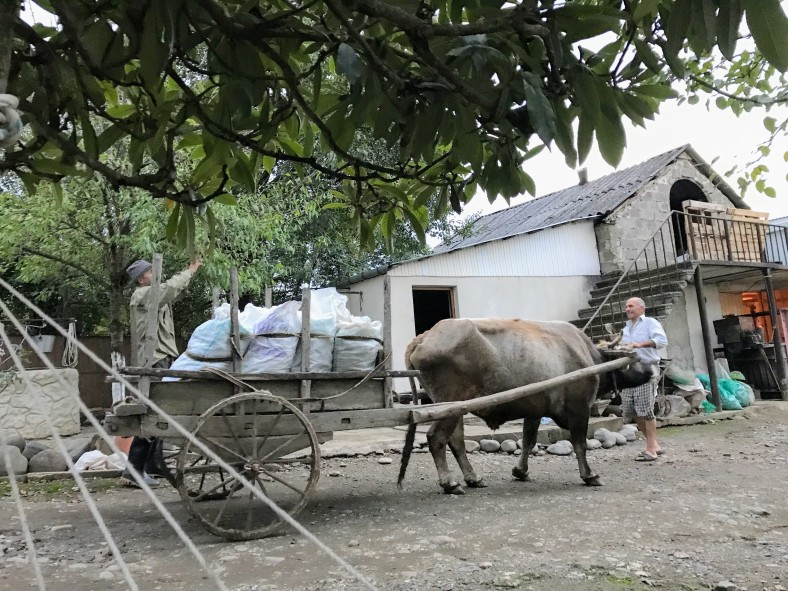 Bakvha welcoming a neighbor, a bull, and more grapes.

Strung between two pear trees, the shaded rope hammock beckoned me. My legs were cramping–the feeling brought me back almost 20 years to high school football two-a-day practices, when seemingly endless bear crawls, up downs, and sprints dehydrated the heck out of us aspiring gridiron heroes. I’d been hauling forty to sixty pound containers of grapes for a few hours, and the only route from field to press was a single-track path alongside vineyards sagging under the weight of Tsitska and Tsolikouri grapes, two of over 500 hundred varieties grown in Georgia.

There would be no tractor, no wheelbarrow, no cart. Just two legs, a sore back, and determination. The grapes had to be picked and pressed soon: rainy days followed by sunny weather primed the fruit. The bunches were bursting with juice.

I drew some cool water from the well, watching the metal bucket descend almost 70 feet down, clanging the concrete walls as it dropped. I quenched my thirst and settled into the hammock, but I had a hunch that the break would be curtailed. If Bakhva, the vineyard’s patriarch, spotted me lounging, he’d surely grin and point back to the fields, where hundreds of kilograms of harvested grapes awaited transfer. He didn’t seem to tire, plus he was making the roughly quarter-mile round trip in blue rubber sandals. Time and time again.

Sure enough, Bakhva spotted me after about five minutes, gestured for me to follow him, and I gladly pulled myself up. I had to step up my harvest game and push through.

Being in this Georgian village at Baia’s Wine on a brilliant autumn day and being welcomed–for a second time –by this incredibly kind and hardworking family make all the tedious aspects of travel worth it. The waiting around, stumbling through transactions due to language barriers, occasionally being ripped off by cab drivers, wearing the same outfit over and over again (I’m looking good in shades of blue and gray, let me tell you): it’s part of the tradeoff for seeking cultural exchange and insights into places far from our own comfort zones.

Rebecca and I are in transition and feel privileged to be on this open-ended journey, of course. But it came about after a series of unanticipated scenarios. We’d always thought that by now, we’d be moving back to New England with a child in tow. But some significant fertility challenges interrupted our plans. We also thought we might end up in New Zealand for six months next year, but my Fulbright proposal wasn’t accepted. So that’s the hand we were dealt.

Soon after hearing about my Fulbright disappointment, a friend recommended the book Vagabonding by Rolf Potts. This text was a game-changer and seemed to reaffirm some of the impulses we felt to hit the road. Even though New Zealand was no longer in the cards, we still felt a strong pull to uproot ourselves, and Potts encourages everyone to eschew the traditional mindset of waiting until retirement or the perfect situation when making the choice to travel.

“We’d love to drop all and explore the world outside, but the time never seems right. Thus, given an unlimited amount of choices, we make none. Settling into our lives, we get so obsessed with our domestic certainties that we forget why we desired them in the first place,” Potts writes. This really resonated with me–it’s so easy to put off travel, adventure, and choices that will significantly alter your trajectory. Straying from the steady march of moving to a bigger home, climbing the career ladder, accumulating things, and being too busy to enjoy the only currency that doesn’t discriminate based on demographics–the amount of time we have each day–can feel so freakin’ hard to do. But it can be done, and I also realize that it’s easier for me to say this without having to provide stability for a child.

Potts also extols the virtues of earning your freedom. Rebecca and I saved money for this journey, but we are both working remotely with hopes of paying our way as we go. So far, so good. Almost five weeks into our travels, we haven’t spent one cent beyond what we’ve earned, perhaps helping to dispel the notion that you must be independently wealthy to travel the world. Granted, Georgia has a very low cost-of-living, but we also want to test out the theory that it’s possible to commit to remote work and live well.

So here’s Roads and Revisions. Roads, of course, representing movement, the literal and figurative journey. With Revisions, there are usually positive connotations involved with actively making changes, whether they be to an essay, a lifestyle choice, a goal or plan. Several years ago, we thought we’d be at a certain point in our lives. We aren’t. That’s ok. We’re certainly embracing big changes for now.

Back at Baia’s Wine, the work ended when the sun set. Feasting commenced shortly after. Huddled around several low tables, we volunteers and guests feasted on khachapuri, eggplant with walnut puree, lobio (beans in a clay dish), fried chicken, and other Georgian staples. Lots of wine, of course.

After numerous toasts to peace, to family, to Georgia, and to Georgian/US relations, among other missives, I asked Bakhva’s daughter Gvanca to ask her father something for me. Over the course of two visits, we had developed a series of grunts, grins, and gestures to communicate, as I can’t speak Georgian or Russian and his English is lacking. I wanted to tell him how impressed I was that he never seemed to get tired during the physical labor of harvest and that I appreciated the opportunity to help out.

The table fell silent as he delivered a lengthy reply, as it is Georgian tradition for the Tamada, or toastmaster, to be shown deference at the dining table. According to Gvancha, he said “If you think about water, a lake or pond doesn’t move. It gets dirty over time. But a waterfall is clean, strong, always in motion. I prefer to be a waterfall.” What a response!

Rebecca and I may pine for a more stable life with full benefits and a permanent dwelling sooner than we think. I really have no idea. But for now, we’re embracing the Road, Revisions, and the continuous action of a waterfall.

5 thoughts on “The Grape Harvest and the Waterfall”