With Abdul and his family

Have you ever seen a football pitch like this?! On the way to Bald Sayt village.

If you have a 4WD, you’ve got to make the drive from Al Hamra to Bald Sayt

Abayas for sale in the Muttrah souk 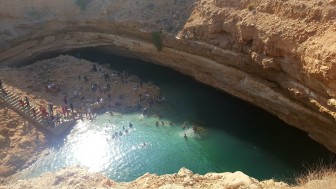 You can pack in many unique experiences in Oman within a week or two, and we tried our best to do just that. It wasn’t a perfect trip–it’s silly to have that expectation, but I hope to visit Oman again someday or at least host some of our new Omani acquaintances if they ever visit the States.

Here’s a gallery of more images if you care to check them out!

You can navigate without a GPS:  Despite a few detours, a nonworking Google Map–the blue dot flickering and slowly following our Toyota Fortuner’s progress–was enough for us. This wasn’t by design. That’s another story. But we were on a well-traveled loop, from Muscat down the coast to Ras Al Jinz, back up through the Wahiba Sands, up to Jebel Shams, then back to Muscat. The roads are mostly new, but signage doesn’t always match up with expectations. Luckily, the Omanis were always willing to help, either in English or enthusiastic Arabic, even though we only knew a few words.

If you have an inkling of adventure in you, you’ve got to rent a 4WD in Oman. For us, it was especially handy over several days. We needed it for our drive out to a fancy desert camp in Wahiba Sands, 11 km on mostly level ground between the dunes. And once you get into the mountainous region, even the paved roads have some serious grades. Driving up to the village of Al Khitaym for the “Grand Canyon” walk is dirt road part of the time and steep. But the highlight of our 4WD adventures had to be the drive from Al Hamra to Bald Sayt–a truly spectacular and adrenaline-pumping journey. After enjoying a walk around Bald Sayt, we ended up giving a lift to a hitchhiking Egyptian family who were leaving the valley enclave, heading to the nearest city of Rustaq for their monthly trip.

Our passengers from Bald Sayt to Rustaq.

The Jebel Shams area is sweet:

While Oman’s coastal area is picturesque in places, and the wadis a highlight for most visitors, we were most impressed by the mountain region. Misfah Al Abriyeen village is one of the most unique places I’ve ever visited–the walk along the Falaj (irrigation canal) is really beautiful. Just be respectful of the local farmers tending their terraced plots with date palms and other crops.

There is also a sweet little museum in Al Hamra called Bait Al Safah, which is enclosed in one of the oldest homes in the village. It provides a glimpse into traditional Omani culture–there are live demonstrations of cooking, medicine-making, and other crafts. Very cool.

Then there’s the “Grand Canyon” of the Middle East. You can park at Al Khitaym, where goats acclimated to getting treats from visitors might even try to get in your car. The trail from this village gradually descends to some ruins tucked along the cliff. And there’s reportedly a nice swimming hole at the end of this walk. We couldn’t find it, which was the only disappointment during this fairly strenuous 3-4 hour round trip. (Someone had told us it wasn’t much of a hike…not true, you need to be in decent shape for this). 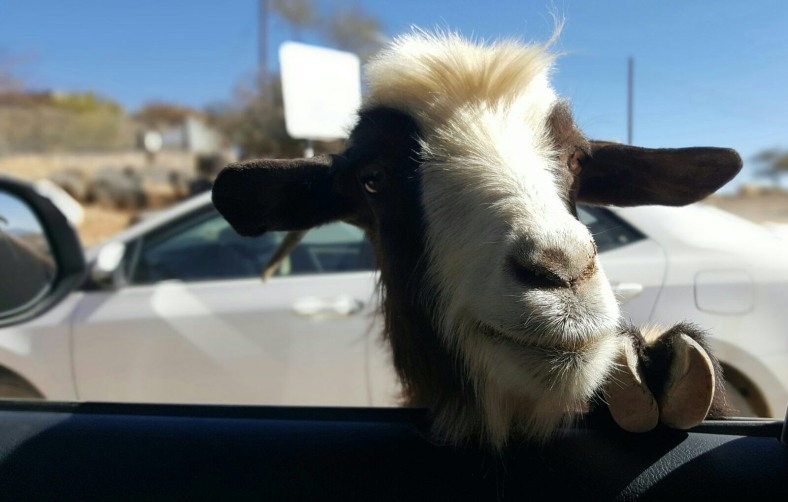 I don’t say this lightly. After our honeymoon in Thailand, during which a man zoomed our lost selves around on his motorbike for an hour, trying to deliver us back to a guest house, and another family hosted us in their traditional countryside home, treating us to grandma’s homemade chili paste with fish, boiled duck eggs, noodles, and other delights, I figured the Thai people were the friendliest on the planet. Now I’m not so sure.

Our first airbnb host Mohammad is one of the kindest people I’ve ever met, full of wisdom and open to cultural exchange–he even went snorkeling with us.

We then met Abdul, an Omani Special Forces paratrooper, while wandering around in Al Hamra. We were looking for the old section of the town, photographing goats in the alleyways. He asked if we needed help; we said we didn’t, thank you. But he then ended up inviting us for dates and coffee on the ground with his mom and sister. This led to two trips to his home, where we enjoyed conversation and received some generous gifts of traditional Omani clothing and aromatics. Like I said in the intro, I hope we can reciprocate someday. Inshallah, as Abdul told us.

It’s such a chill place compared to Dubai:

Oman’s Sultan Qaboos, ruler for the past 47 years, determined that he wanted to keep Oman’s traditional culture intact, developing slowly and sustainable. As a result of this leadership, you won’t see gleaming skyscrapers in Muscat, or over-the-top theme parks. There is a coherence to the place that you won’t find in Dubai, where anything goes architecture and rampant development can make you feel like you’re in the midst of a kid going crazy playing SimCity.

Avoid visiting the wadis on holidays and weekends:

We unknowingly booked our rental car during Oman’s long holiday weekend in early December. This caused the wadis to be overflowing with people. If you are looking to experience the wadis during a less hectic time, try to visit them on the weekdays and get out early.  Nonetheless, we loved swimming at Wadi Bani Khalid, where there are plenty of pools to explore (keep walking up the valley to avoid crowds and explore more pools).  If you are a woman, plan to swim in your clothing or shorts and a one-piece bathing suit; as it is considered disrespectful to strip down to a bikini. You will likely receive some stares no matter what; Omani Muslim women do not swim in public places.

A few other travelers that we met during our trip also encountered a chaotic crowd at the turtle reserve for the nighttime viewing. We were advised by an expat who has lived in Oman for 20 years to opt for the reserve’s early morning tour, which begins at 4:45 am. According to him, you have a better chance of seeing the turtles with a much smaller group.

Don’t Miss the Souk in Muttrah

The enclosed souk in Muttrah, the old port in Muscat, should not be missed. It is an endless maze of vendors selling a combination of inexpensive tourist knick-knacks and more authentic items. Don’t be afraid to negotiate.

2 thoughts on “On the Road in Oman: Insights and Tips”